Tank Warfare Tunisia 1943 is a tank simulation strategy video game developed by Graviteam and Strategy First. The game was released on 2 May, 2017 via Steam for Microsoft Windows. 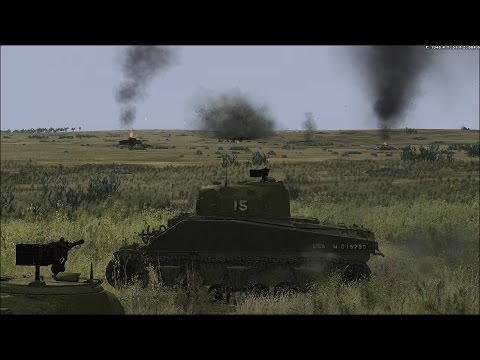 Game is comprised of two modes:

Operational – turn-based mode where you can shift and concentrate forces in the chosen directions, resupply and replace units, repair and refuel vehicles.

Tactical – real-time mode where you are conducting fire combat with the enemy, capturing territory, destroying vehicles and the enemy manpower.

Large-scale operations for the US Army and Wehrmacht with realistic organizational structure. The campaign features more than 50 detailed vehicles produced in Germany, USA and UK. Over 400 sq. km of realistic landscapes were reconstructed from topographical maps and photo and video materials.

– Enhanced UI: functional interface of various panels, radial orders menu and other enhancements.
– Interface appearance and customization: three variants of appearance are included, customizable unit markers (Wehrmacht, NATO, Red Army).
– High replayability and advanced AI, which selects the best strategy based on behavior, not a predetermined script.
– Advanced management of forces in the operational phase: reinforcement strategies and management of reserves.
– Statistics keeping: performance of each unit is recorded (kills, losses, awards, etc.). After each battle, damages and condition of forces and vehicles, as well as telemetry are shown in the after battle statistics.
– Battlefield simulation: realistic vision devices, smoke screens and flares, creation of trenches, explosion craters. Remnants of previous battles remain on the battlefield until the end of operation.
– Realistic soldier behavior: each soldier has several essential parameters, such as experience level, stamina and morale, which influence their behavior and effectiveness.
– Detailed weapon modeling and realistic ballistics: bullets and projectiles follow ballistic trajectories, taking wind, temperature and other parameters into account.
– Advanced armor penetration: modeling based on ballistic histograms without simplifications of probabilistic methods, generation of secondary fragmentation fields takes into account many parameters, such as the change of the field shape in space, fragments and armor characteristics, armor thickness and damage conditions.
– Complex vehicle damage system: engine, suspension, sights, weapons and targeting mechanisms can be damaged separately, affecting the combat capabilities.
– Destructible environment: almost everything can be blown up and destroyed, from landscape surface and buildings to vehicles and enemy defensive installations.
– Advanced control of the off-map artillery, featuring various fuse settings and shell types.
– Formation and movement modes: lines and columns, movement by road and covertly, infantry following behind tanks, setting a delay, fire sectors, etc.
– Automatic smoke screen laying: units set up smoke screens when enemy is spotted.
– Dynamic change of the time of day, light sources and weather effects, influence the course of battle, visibility and area passability.

Also, you can view detailed info on each unit in the interactive encyclopedia, and an interactive tutorial will explain most aspects of the game.