Kingdom Wars 2: Battles brings a fresh perspective on the fantasy real-time Strategy genre, combining the best of Zombie survival and long term crafting with complex fast-paced city-building and skirmish siege combat. All in a beautifully, yet gory game world where players fight across the epic battlefields in multiplayer skirmish and coop with thousands of other players. And with an episodic singleplayer campaign bringing epic storytelling, with countless battles and adventures. New Episodes will be released as a free expansion pack, every few months.

Kingdom Wars 2: Battles comes complete with an epic story-driven singleplayer campaign, as well as progressive multiplayer storytelling. Providing hours of engaging cinematic narrative, and original gameplay, campaign tells the story of the three great races, trying to survive in a world engulfed by total war. Each new episode will continue both the singleplayer and multiplayer story-arcs as well as introduce new races and locations. And in best Reverie World Studios traditions, new episodes will be released as a free expansion pack, every few months.

Realistic medieval siege combat brings fresh gameplay to the Strategy genre, with intricate stronghold construction, and over 25 defensive and offensive siege weapons. Ram the enemy gates, scale the walls with ladders and siege towers, and unleash trebuchet bombardments, while building your own strongholds and citadels protected by boiling oil and wall-mounted catapults. 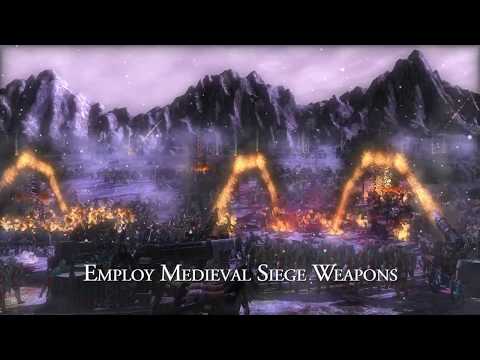