Has-Been Heroes is an action role-playing strategy video game developed by Frozenbyte and published by GameTrust. The game was released for Nintendo Switch, PlayStation 4, Microsoft Windows, and Xbox One, on 28 March 2017 in North America and in Europe and Australasia on 4 April 2017. 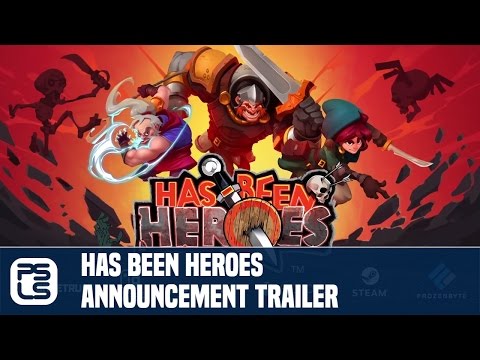 About This Game:
Has-Been Heroes is a challenging, lane-based roguelike game of strategy and action, featuring a band of heroes on a quest to escort the King’s twin princesses to school!

Players control three characters during the journey and must focus on coordinating melee attacks, managing cooldowns and combining hundreds of different spells to create devastating combo effects, all in order to defeat an endless army of undead, summoned in their path by the Great Ghoul!

The rewarding strategy game features irreverent humor, expanding world maps and increasing levels of difficulty, compounded by the specter of permadeath. The massive quantity and randomness of spells and items, as well as additional unlockable heroes allow for thousands of new experiences, forcing players to change their playstyle each time they start a new game.

STORYLINE
The teeth of time chew on even the bravest of champions, and there comes a time when wizened old mages and warriors are just one last adventure away from retirement. Thankfully, a young rogue joins the heroic Has-Been Heroes, for who else can read the tiny text on those potion bottles and assist the “rusty” crew? The rogue comes along not a moment too soon, for King Fortinbrax has summoned his oldest, most trusted heroes for a final, epic quest. The heroes must escort the twin Princesses Avaline and Beatrix to a faraway Academy (to school!)- but the road is long and fraught with peril.

FEATURES
– Control three characters across three lanes, coordinate their attacks and spells to defeat an incoming horde of enemies!

– Plan your route carefully on the randomly generated maps filled with surprises! Travel through merchants, spell vendors, treasure chests and other crossroad locations to boost your character’s powers… but be vary not to succumb to the darkness!

– A combination of turn-based and RTS game mechanics featuring easy-to-learn basics that are tough to master and evolve into frantic complexity. Discover new tricks and hidden features after hours of gameplay!

– Meet the epic band of heroes as the young and eager Rogue, joining the company of the wise monk Metacles and the giant-wrestling warrior Crux… and discover a band of long lost friends, such as the Anthropologist turned Mexican Wrestler, the ever-vigilant and paranoid Bodyguard, and many more!

– In roguelike fashion, die and try again! Each run is different due to randomized maps, spells, items, and enemies. With each level the length of gameplay increases, compounded by the peril of instant death, which forces the player to start over from the beginning.